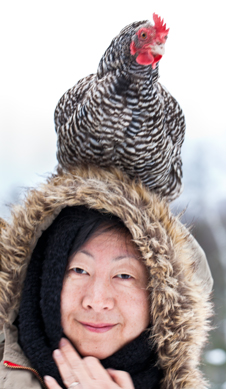 Build Your Own Earth Oven

Quick! before summer is over and there is a chill in the air, you MUST make an earth oven. Also known as a cob oven, ours is made entirely from the rock, soil and sand on the cottage property. The only items purchased were the fire bricks, woodstove pipe, and a bale of straw. Our design is based on the methods outlined in Kiko Denzer’s book, “How to Build an Earth Oven”. Invite some friends over and make it in a weekend. 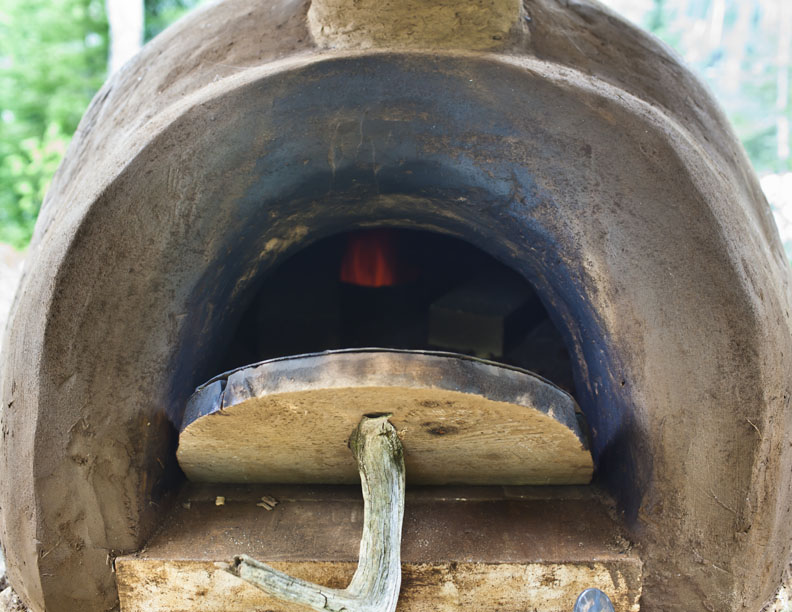 Flames seen shooting up into the back of the rocket earth oven via the stove pipe.

The beauty of this oven, is that Hubby brilliantly merged a rocket mass heater into the design. Instead of the traditional way of building a wood fire on the oven floor, the fire is located below in a burn chamber. The rocket mass heater burns fuel more efficiently, using very little wood. A whole day of cooking used only four, medium-sized hardwood logs. Once the fire catches, it burns really clean, there is no smoke or creosote. You are left with white ash. Nothing is wasted. The black soot you see is from earlier trials of getting our fire going. After a couple of days of getting used to our oven, we’ve finally learned to cook by feel. 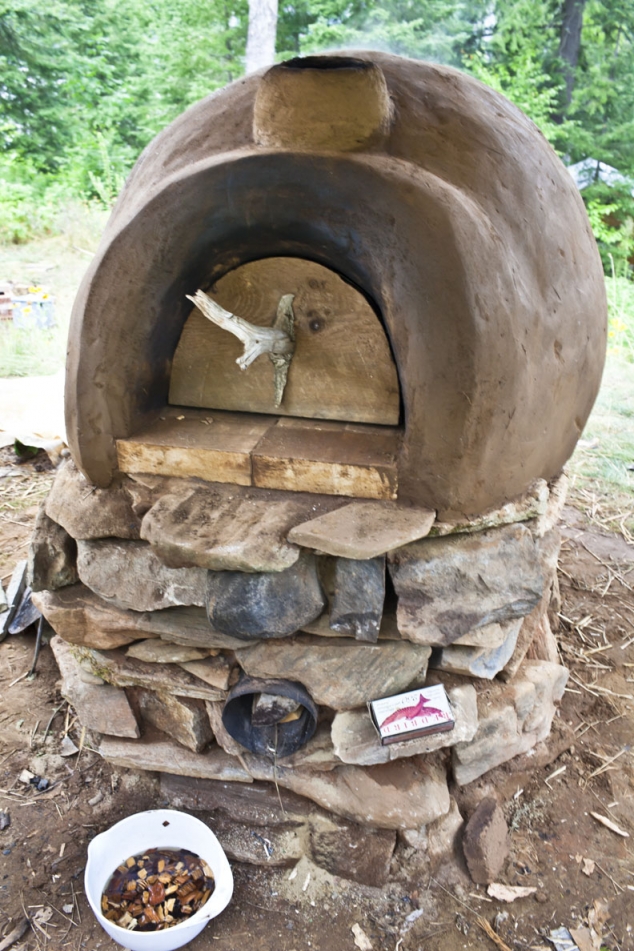 Hickory chips soaking, you can see the steam leaving the oven as the earth is drying.

I purchased Kiko Denzer’s book, a few years ago, where it sadly remained at the bottom of our cottage “To Do” list. My one regret is, what took us so long? It’s the greatest thing ever and has become the heart & soul for gatherings large & small. It turned a space that wasn’t well used, into a popular place to linger: stoking the fire, chopping wood, sipping wine, picking basil, playing guitar, and of course stuffing our faces. It makes the simplest pizza taste like the best pizza you’ll ever have in your whole entire life. Okay…so it also happens to be topped with fresh San Marzano tomatoes and basil growing just a few feet away. At 700•F, it takes 2-3 minutes to bake a pizza. From field to table in less than 5 minutes. How great is that? I’ve added a few more garden beds to grow a larger selection of pizza toppings.

You can have cinnamon rolls on demand by making up a few batches and
freezing them individually and storing in x-large Ziplocks.
I even freeze the icing, portioned out in smaller Ziplock sandwich bags.

Besides pizza, bread, cinnamon rolls and cookies, we’ve also been experimenting with roasting and smoking meats. Verdict: pork tenderloin – melt in your mouth deliciousness! Rack of lamb – succulent! Chicken – crispy like Peking Duck! All with a subtle hints of wood-smokey flavour. Baked potatoes, roasted potatoes and beets were also very good. It’s a continuous process: stoke fire, put something in oven, put something in mouth. Help! One can’t have an empty oven when it’s burning really well.

The first thing to do is test your dirt for strength and shrinkage.
We are lucky to have perfect dirt, the ratio of sand and clay holds together without shrinkage.

To do the shrinkage test, mix the dirt with water to form bricks at least an inch thick. I used a 9 x 13-inch cake pan.

One-inch increments were marked to measure against. Lucky for us, the bricks dried without any shrinkage.
No shrinking means a strong soil mix.

Start with a solid foundation that will not move and keep your oven off the ground and dry.
You don’t want any moisture wicking up from the ground causing your oven to crack.

Hubby tests the draw of the fire before continuing. What you see is the burn chamber for the rocket heater.
There is also a cleanout exit at the back which you can’t see. The pipe makes a sort of a “T” join.

Heat will rise and exit from the top right into the oven. It is mostly steam and very little smoke that exhausts out.

Continue to build your foundation; the inside is filled with old bricks from a neighbour, surrounded by flagstone from our hillside.

Level with a layer of sand in preparation for the fire bricks used to line the oven floor.

The light coloured bricks is the oven floor. Wet sand is mounded on top to make the form for the domed walls.

Making clay potatoes for the next step.

Wet newspaper is applied to the finished sand form.
The first layer of mud (thermal layer), will hold most of the heat from the oven.

Thermal layer complete! The mud was a bit on the wet side and started to sag at the bottom from all the weight.

The first layer is roughed up for the second layer (cob layer) to stick to.
The door opening has been cut out, exposing the sand form inside.

Cob is a mixture of mud and straw. It provides both strength and insulation.

The girls help with the mixing of the cob. The cob does a fine job insulating, and is remarkably fireproof.
Inside temperatures can reaching 1200•F, but the outside is barely warm to the touch.

Cob logs are rolled with the help of heavy plastic.

Press down, rather than pound against the sides.

There is nothing more satisfying than creating something with your hands.

A final finishing layer of mud is troweled on.

Scrape out the sand once the cob has had a chance to stiffen up.
Remember the newspaper layer? Keep scraping till you reach that layer.

The door was cut out of a really thick piece of old-growth pine and lined on the inside with a sheet of galvanized metal.
It’s attached all around with screws and washers in between to create an airspace.
This helps to keep the metal from heating up the door. I love the driftwood cedar door handle, rescued from the lake.

There are buildings made out of cob that are still standing after hundreds of years. Maybe this earth oven will too.

show hide 58 comments
link to this post
email a friend